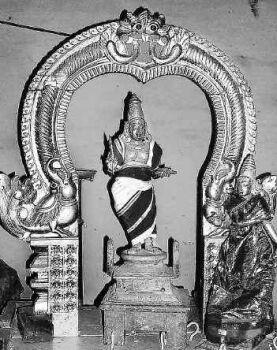 Chitrgaupta is entrusted to assist Lord Yama in keeping account of the deeds of the living beings on earth and sending them to hell or heaven after death according to their deeds. Once Lord Shiva was accompanying Goddess Parvati when it came to his mind that there must be someone to keep the account of the deeds of the people on earth. So Lord Shiva drew a beautiful picture of a rainbow onto a golden plate, so beautiful was the picture that both Lord Shiva and Parvati decided to bring the picture into life and thus the picture was transformed to Chitragupta, the one who was entrusted to perform the duty of maintaining accounts of the sins and virtues of all living-beings. The word 'Chitra' means a picture and the word 'Gupta' an accountant so the meaning comes to the figure that became an accountant.

Another legend states that once Lord Yama was tired of keeping account of good and bad deeds of so many people. So he prayed to Lord Shiva to give him an able assistant. Lord Shiva asked Lord Brahma to create one for him, since he was the creator of universe. Lord Brahma created a fire within the sun, with the power of the sun the rainbow was created with which transformed into a girl known as Neeladevi. Neeladevi lived with the sun and through them a male child was born who was named as Chitragupta. The child on birth carried a book in his left hand and a writing nail in the right. Since Chitragupta was born of a rainbow it is a belief that Chitragupta is highly pleased with the gift of multicolored cloth.

Chitragupta temple was built in the ninth century by the Cholas. The main deity of temple of Chitragupta or Chitragupta Swamy Temple is holding a pen in his right hand and a palm leaf in his left hand symbolizing the nature of his work. The idol of Chitragupta can be seen with his consort Karnikambal. It is believed that upon the worship of Lord Chitragupta, the devotee would be bestowed with prosperity and also the evil effects of Kethu would be neutralized.

Puja is performed four times on all days of the week in Chitragupta temple in morning, evening, afternoon and night. Apart from this special puja is performed by the temple on the request of individuals for which charge is there. Below are special Puja performed:

Parihara Abishekam
Pooja cost: Rs.600/-, you have to inform the temple authorities one day before.

Parihara Chitranna Milk Abishekam
Pooja cost: Rs.1800/-, you have to inform the temple authorities five day before.
This Pooja has to be performed for 7 weeks and only on Wednesday and Saturday at 07:30 am.

Rahu Ketu Peyarchi
The temple authorities will inform the date of puja on their website.


How to reach Chitragupta Temple