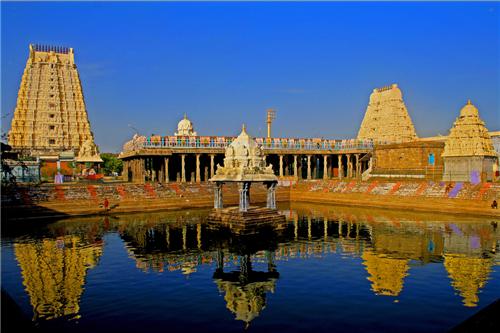 Another such legend says that once a washer man who lived in Kancheepuram used to wash the clothes of all the Saivites and was an ardent devotee of Lord Shiva, Lord Shiva in order to test his devotion came in the form of an old Brahmin and asked him to wash hi clothes before dawn. At the same time Lord Shiva made the weather cloudy. On seeing the weather the washer man was very disappointed and collided his head with the stone. On seeing this Lord Shiva appeared in his true form and graced his devotee.

Another legend says that once Vegavati River overflowed and threatened to engulf the Shiva Lingam that Goddess Paravti made out of sand under the mango tree. Parvati or Kamakshi, embraced the Lingam, and Shiva, touched by the gesture came to his true form and married her.

Ekambareswara Temple sprawls over 23 acres of land. The temple’s Gopuram (a monumental tower at the entrance of the temple) is about 59 m which is the tallest such structure in south India. One of the exquisite features in Ekambareswara Temple is the Aayiram Kaal Mandapam, or the "hallway with a thousand pillars", which was built by the Vijayanagar Kings. Other features being the presence of 1008 Shiva lingams decorated in the temple’s inner walls. There are a total of five courtyards apart from the thousand pillared hall in the temple. There is a small Ganesha temple and a pond in the fourth courtyard and lots of smaller shrines in the third courtyard. The Shiva Lingam along with the image of Shiva is there in the deep interior of the house or the sanctum sanctorum. There also is a small shrine for Lord Vishnu inside the temple complex. Vishnu is prayed as Vamana Murthy in this temple and it is one of the 108 Divya Desams or Vishnu temples.

There is a mango tree in the temple which is almost 3,500 years old. The tree has four branches and is said to yield fruits of different tastes, sweet, citric, spicy and bitter, depicting the four Vedas.  Deity of Lord Ekambareswara or Lord Shiva is in a separate shrine of glass under the Rudraksha Pandal-tent, the roof with 5008 Rudrakshas. The deity of Lord Shiva is in huge form inside the temple. It is said that, the deity darshan (view) grants the devotee total relief from the cycle of births and deaths.

Address of the Temple

Below are the details of Pooja performed in this temple :

The temples nearby Ekambareswara Temple are: