It is said that the way to one’s heart is through stomach. Good food is a weakness for most of us and we Indians love to boast of this weakness. Since India has diverse cultures and traditions so are the varieties of food available. Kancheepuram being a city in the state of Tamil Nadu in the southern part of India, the dominant cuisine available in Kancheepuram is south Indian but one can also find north Indian, Chinese, and Italian  food. Since food in Kancheepuram has typically south Indian influence, you would find a lot of presence of rice, spices, chillies, coconut and native fruits and vegetables in the cuisine. 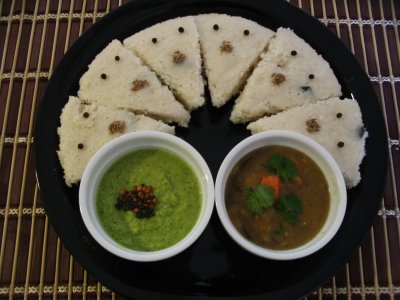 A conventional restaurant following Kancheepuram food style would have something like the below in the breakfast menu:

dosa (pancake made of black lentils and rice), aval(a type of rice)

upma (thick porridge made from dry roasted semolina with added seasonings or vegetables).

Appam (pancake made with fermented rice and coconut milk)

Vadai with coconut chutney (snacks made from dal, lentils, gram flour or potato)

In Kancheepuram and most of the south Indian states, rice is the staple food. Some of the dishes for lunch and dinner served in Kancheepuram restaurants are:

Kuzhambu (it is eaten generally with rice. It is made of varieties of dal including vegetables)

Sambhar (is a vegetable semi solid type based on broth made with tamarind, it’s very popular here and is eaten with rice or dosa)

Rasam (it’s a kind of soup which has tamarind juice as base added with variety of vegetable, tomatoes, spices, chilies etc. It hits the taste bud instantly; it is eaten with rice here)

Puliyogare (it is basically tamarind rice mixed with ground nuts, pea nuts, coconut, red chilli, jaggery, dal etc. The food does not go bad till long, so people prepare and carry this to have during long journeys).

Thayir Sadam (curd rice or yogurt rice added with chillies, ginger etc. The dish when served with a dash of pickle will tempt you to lick fingers).

Parota (similar to north Indian Paranthas, made of maida).

Kottu (beef or chicken or egg are minced, chopped and rolled into a special kind of roti called Kottu roti. It is little similar to the north Indian dish Shwarma. For vegetarians,  vegetables, cheese are rolled into the roti)

Muttaiparotta (similar to the north Indian Parantha, but it is minced with scrambled egg)

Karidosai (dosa with mutton stuffing), meatballs and many more

Payasam (commonly known as Kheer, it is rice pudding made by boiling rice with milk topped with raisins, cashew nuts, pistachio etc.)

Kozhakkatta (similar to modak in north India, this is stuffing of grated coconut mixed with jaggery into rice flour and then baked).

Kesari (also known as sooji ka halwa in north India, it is an orange color sweet made from semolina and is most popular during festive seasons)

Thengai Paal (It is a sweet dish made of hot milk, jaggery, coconut and cotton seeds).
Ulundu Kali ( It is made Jaggery, black gram and ginger oil).

Oputtu (similar to Pizza but it has sweet stuffing inside).

Traditionally in Kancheepuram, the food is served on banana leaf and food is eaten after sitting on floor but due to cosmopolitan culture and westernization, the banana leaf culture has given away to the western culture of buffet and fine dines. Nevertheless even today you can find a restaurant in Kancheepuram following the old tradition; you can jump in there to get a taste and feel of authentic Tamil cuisine and environment.

Many organic dealers and retailers have come up in Kancheepuram as people are becoming more and more health conscious. Below is a list of such organic stores in Kancheepuram:

Food from other countries in Kancheepuram

As Kancheepuram witnesses a tremendous growth in the influx of foreign tourists,  many multicuisne restaurants specializing in Continental, Chinese, Mexican, Italian, Thai, Korean, Japanese cuisine have opened in Kancheepuram.