Must Visit Shrines in the City of Thousand Temples

Located on the banks of River Vegavathy, Kanchipuram, fondly called as Kanchi is a celebrated spiritual hub of South India. Just 74.7 km away from the bustling urban center of Chennai (via NH4), Kanchipuram reminds of countless religious sites, especially Hindu temples. As a matter of fact, the city is dotted with temples all around and thus called as the 'city of thousand temples'. Along with the holy cities of  Ayodhya, Haridwar, Varanasi, Mathura, Dvaraka and Avantika, Kanchipuram is one among the seven cities (Sapta Puri) as providers of Moksha (liberation from the cycle of death and rebirth), according to the Hindu religious scripture of Garuda Purana.

Furthermore, Kanchipuram is a sacred pilgrimage destination for both Vaishnavites and Shaivites. It is important to mention that among the 108 Divya Desams (108 holy temples of Lord Vishnu that are glorified in the sacred compositions of the Tamil Azhvars) fourteen temples can be found in the temple city of Kanchipuram. What is more, Kanchipuram has been picked out as one among the heritage cities for Heritage City Development and Augmentation Yojana scheme (HRIDAY) of the Government of India. Let's get to know the list of Top 10 Must Visit Temples in the City of Thousand Temples, Kanchipuram.

Also called as the Ekambareswarar Temple, the landmark temple in Kanchipuram is celebrated as the most prominent temple in all of the temple city of Kanchipuram. Known for its ancientness and the existence traced back to at least 600 AD, the Ekambareswarar Temple is one of the oldest Hindu temples in the country. The historic temple along with the Trichy Thiruvanaikaval Jambukeshwarar Temple, Thiruvannamalai Arunachaleswara Temple, Kalahasthi Sri Kalahastheeswara Temple and Chidambaram Thillai Natarajar Temple are called as the Pancha Bhoota Sthalams. 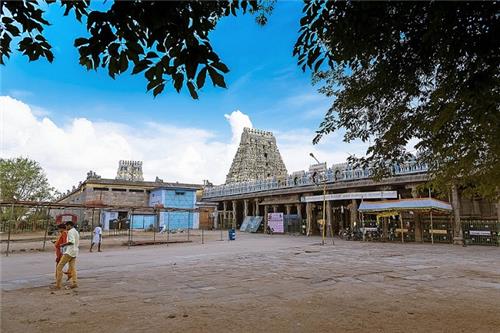 The massive temple represents the element of Earth. As adding yet another feather in the hat, the Kanchipuram Ekambareswarar Temple is also named among the  275 Paadal Petra Sthalams and is glorified in the sacred compositions of Thirugyana Sambandar, Sundarar, Appar Tirunavukkarasar Nayanar and Maanikavasagar. Furthermore, the Shiva temple stands as an example of the illustrious Dravidian architecture.

The oldest religious structure in the temple city, Kanchi Kailasanathar Temple was constructed by the Pallava Dynasty during 685-705 AD. It is believed that the notable Raja Chozhan I of Chozha Dynasty visited this temple in Kanchipuram and went on to construct the world famous Thanjavur Brihadeeswarar Temple. Presently, the Kailasanathar Temple is well-kept by Archaeological Survey of India (ASI) who declared the temple as an archaeological monument. 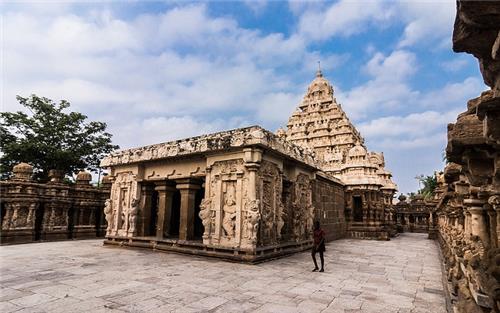 With its outer walls made of arenaceous rock, the whole site is nothing but a labyrinth of noteworthy sculptures of mythological animal like Yali and has distinguishable shapes of early Dravidian architectural designs. Adi Shankaracharya is closely related to this temple and is considered to have built the Kanchi Kamakoti Peetham after the Kanchi Kailasanathar Temple. The primary deity of this temple is Lord Shiva who offers his blessings in the form of Kailasanathar.

Dedicated to Lord Shiva, the Iravatanesvara Temple in Kanchipuram was constructed by Rajasimha Pallava, a notable ruler of the Pallava Dynasty. Rajasimha Pallava, also known as Narasimhavarman II built this architectural grandeur during his rule between 700 and 728 AD. The Iravatanesvara Temple is more renowned for its Gopuram/Vimana (temple tower) which is nothing short of a magnificence of the Dravidian architecture. 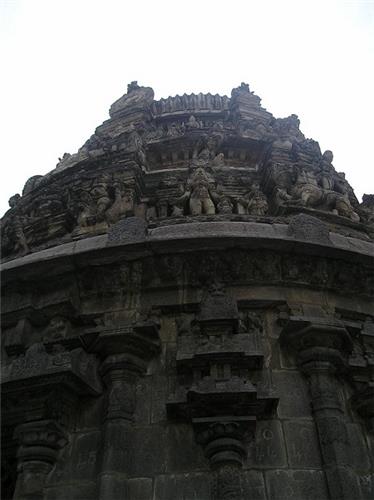 As the temple was found in ruinations, Archaeological Survey of India (ASI) has undertaken the maintenance and named the site as a protected monument. The Government of India agency also fixed the original architectural brilliance of the temple towers established over the garbha gruha (sanctorum Sanctorum). The Kanchi Iravatanesvara Temple is indeed one of the best from the Pallava Kingdom. People visit the Iravatanesvara Temple in Kanchipuram to seek relief from diseases, to gain knowledge, to attain wealth and for salvation.

One of the most visited Hindu temples of Kanchipuram, Arulmigu Kamakshi Amman Temple is a temple that is dedicated to Goddess Kamakshi, a form Parvathi or Thirupura Sundari. The historic temple is often associated with one of the most prominent Hindu gurus Adi Sankaracharya. Along with Goddess Akilandeswari of Trichy Thiruvanaikaval Sri Jambukeshwarar Temple and Goddess Meenakshi of Madurai Meenakshi Temple, Goddess Kanchi Kamakshi are regarded as the important temples of Goddess Parvathi. 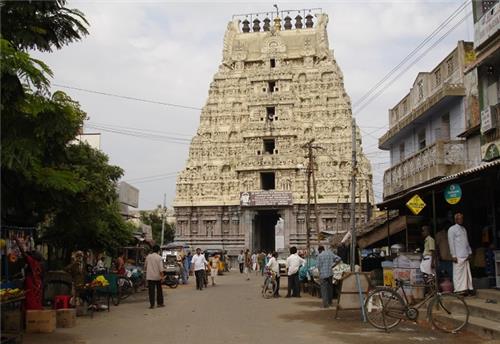 Here in this temple, the presiding deity, that is, Goddess Kanchi Kamakshi offers her blessings to devotees from a seated posture, in a venerating yogistic stance intending peacefulness and successfulness. This is considered as singular when compared to the traditional standing posture of Goddess Parvathi. It is rather strange for a temple city that there is no other Kamakshi temple found in the entire city. 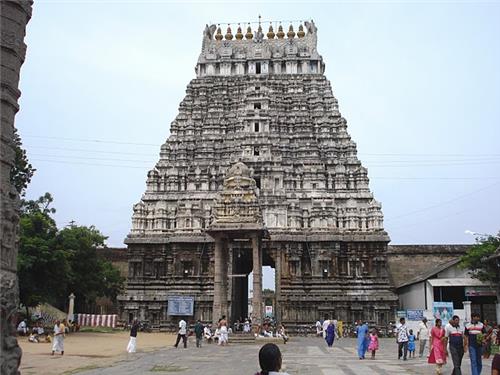 Furthermore, it is widely believed that Sri Ramanujar also called as Ilayalvar or Sri Ramanujacharya, Udayavar, a Hindu theologian and scriptural exegete resided in this Vishnu temple. Along with Kamakshi Amman Temple and Arulmigu Kanchi Ekambaranathar Thirukoil, this temple is called as Mumurtivasam. The Varadaraja Perumal Kovil is called by several other names which include Aththigiri, Vezhamalai, Attiyuran, Thiru Katchi and so on. 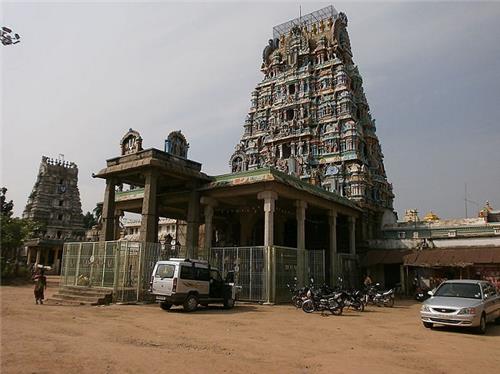 The primary deity of the Sri Adhikesava Perumal Temple is Adi Kesava Perumal or Astabhuja Perumal, who offer his blessings in the sanctum sanctorum in a majestic posture with eight hands. Separate sannadhi can be found for the goddess called as Alamelu Mangai. Some of the other sannadhi found in this temple include Alwars, Hanuman, Chakra and Sarabeswara, Andal and so on. 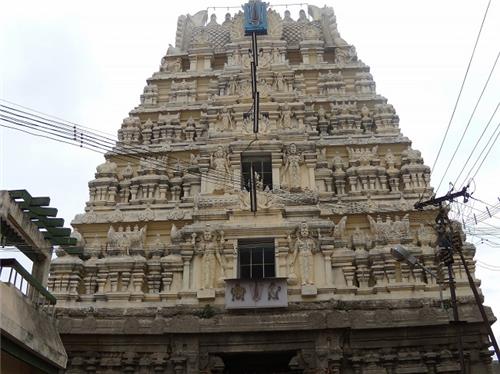 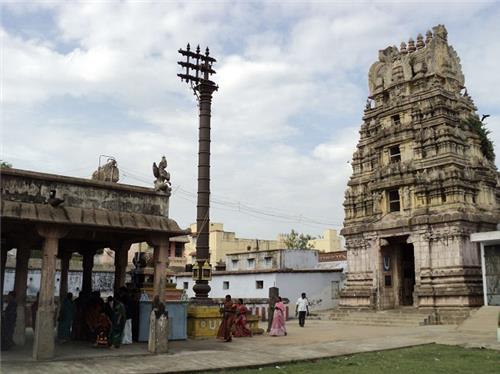 The sanctum sanctorum of this temple features a massive 25 ft primary deity of Pandava Thoothar Perumal who offers his blessings from a seated posture, that is, in Arda Padmasana posture. The goddess here is called Rukmini (Goddess Lakshmi). 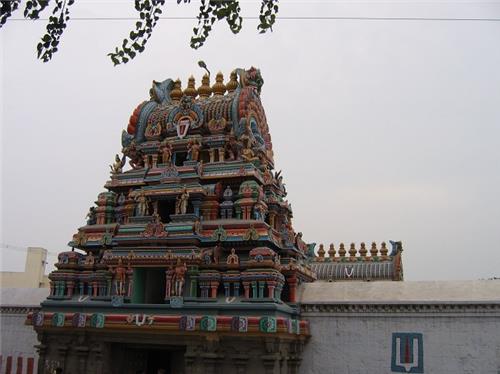 The Ulagalantha Perumal Temple is located in Periya Kanchipuram area and is quite close to the renowned Kanchi Kamakshi Amman Temple. This Divyadesam temple also is the home of four other Divyadesams that is to say Thirukaaragam, Thirukkarvaanam, Thiruneeragam and Thiruooragam. 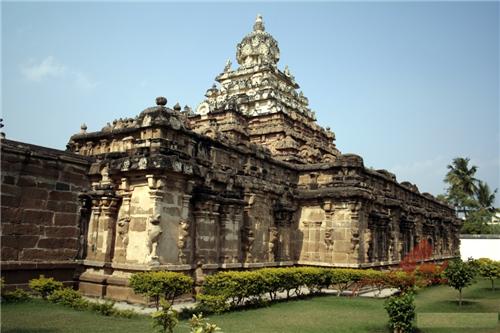 Lord Vaikunta Perumal in the sanctum sanctorum offers his blessings in a beautiful standing, sitting and reclining posture. The garbha gruha and the first temple corridor are of kudavarai pattern constructed with sand rock. Goddess in this temple is called as Vaikundavalli who offer her blessings from a separate sannadi which is east facing.