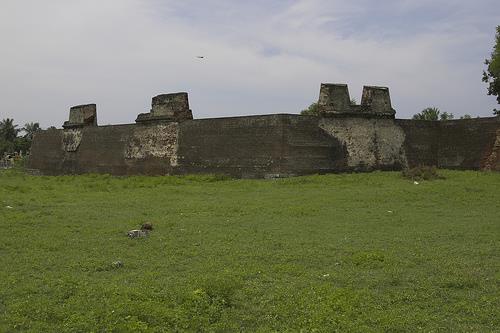 Kanchipuram known for its silk sarees, temples and culture also has some historical sites that make this city a beautiful and favored tourist spot in Tamil Nadu. Every part of India has some story to tell about its involvement in the history before independence. Those stories can be seen in the Forts and other monuments that stand still today. Sadras Fort or the Dutch Fort in the Coromandel Coast of kanchipuram district is a beautiful building that depicts many historical stories that it has witnessed.

The Dutch has ruled the Coramandel coast before British and along side of British rule for many years. The significance of their rule can be seen in the forts, churches, cemeteries and other settlements of the region. Sadras Fort is one of the remains of colonial history in this part of India. Like a typical Dutch construction, the Fort is made of brick structures and arches.

Sadras fort which is the anglicized form of Sadurangapattinam in Tamil was initially a Hindu temple. Lord Vishnu was the presiding deity of this temple. But the Dutch invaders transformed it into a Fort just for their commercial purposes. The Fort is believed to be built in early 17th century when the town was business center for commodities like muslin cloth, pearl and edible oil. The Fort was mainly used by the Dutch as granary and stable. One can also see the place where army of elephants was kept.  The Fort is believed to be built by the Dutch Queen. She has a secret tunnel from her room which leads to the beach facing the Fort. She would go to the beach secretly take bath and come back to her room quietly. And the tunnel helped her to escape when the Fort was in danger.

The Fort was severely damaged due to the two wars fought between the Dutch and the British in 1818. When you are standing inside the Fort, the ruins tell you how badly it was hit form the by the British tanks attacking from the beach.

Those who died in the Fort were buried in the Cemetery that is part of the Fort known as grave garden. The Grave garden is on the right side as soon as you enter the Fort. One can see the picturesque tombs on a raised platform in the grave garden that have scripts inscribed on them. The inscriptions are as old as 400 years dating 1620-1780 AD. Some graves had double tomb stones which is quite different. 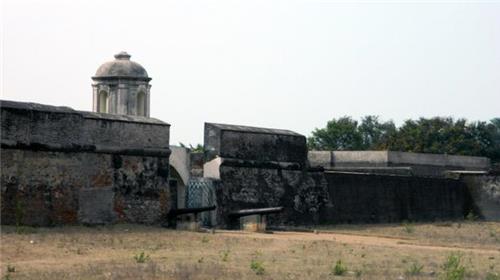 The Sadras Fort which is in ruins today is under the maintenance of the Archeological Department of India since 2003. The Fort is undergoing major restorations. The excavations in the Fort by the ASI revealed utensils and other findings that give a clear insight in to the lifestyle of Dutch people who used this Fort.
There is no entry fee to visit this place and it is open to all during the day time. If you are interested in visiting historical places, then Sadras Fort will not disappoint you.