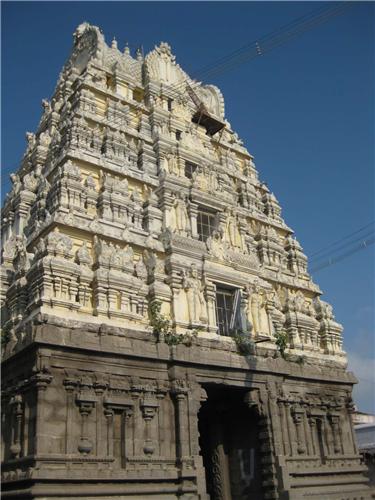 Yathothkari Temple is spread over an area of about 4 acres, has two prakarmas (open courtyards), a five tier rajagopuram (massive gateways) facing west. The main shrine is that of Lord Yathothkari or Sonna Vannam Seitha Perumal reclining on his serpent couch but his head on his left side instead of his right side in all other temples. He did so only to make the world know by this difference in his posture how faithfully he carried out the wishes of Bakthisara, the sincere devotee. Consort of Lord Yathothkari is known by the name of Sri Komalavalli. There is a separate shrine for Goddess Komalavalli. The sacred spot where the Lord spent one night in their company is called "Orirukkai" It is in the lotus tank of this temple that the first of the Alwars, the Poigai Azhwar was born in a Lotus of the poigai pushkarni or the temple tank. There is also a beautiful idol of Goddess Andal or Bhooma Devi, an ardent devotee of Lord Vishnu who conquered Vishnu by her love and devotion. There is a shrine for Lord Ram along with Lakshman and Sita. Opposite to the main shrine there is a small shrine of Garuda. 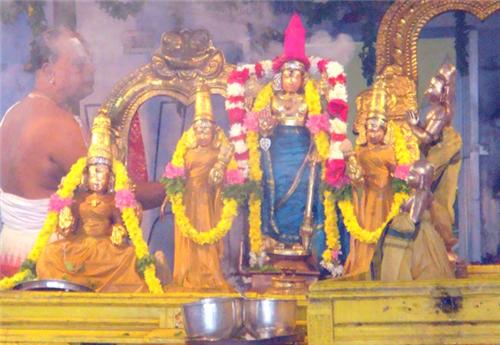 In the month of Asvija (September – October) Aippasi Thiruvonam day is celebrated as the Saturumurai day of Poigai Azhwar in this temple on a grand scale. A golden palanquin is used during festivals here.Also Vaikuntha ekadasi is celebrated for 22 days in the Tamil month Margazhi (December- January). The brahmotsavam of Lord Yathothkari is celebrated in asterism Revathi in the month of Panguni (March – April).

How to reach Sri Yathothkari Temple

Sri Yathothkari Temple is about 3 km from the Kancheepuram central bus stand, there are regular buses plying from Chennai to  Kancheepuram.