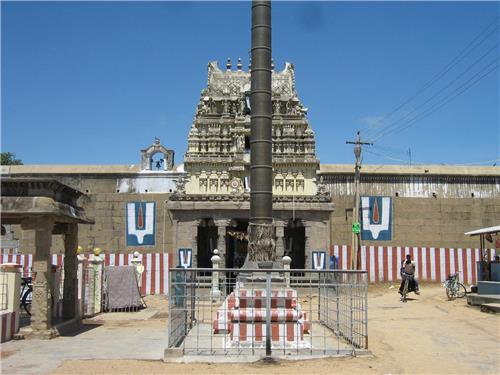 Located about 7 KM from Kancheepuram is a small temple town Thiruputkuzhi. It also falls on the Chennai - Vellore highway some half a kilometer away from the Baluchetti Chattiram. One can reach temple in 50 minutes from Chennai by road.

History of the temple

It is believed that this place has history dating back to the period of Ramayana. During the Ramayana period, when Sree Rama leaves all his belongings and goes to forests as ordered by his father Dasaratha, his wife Seetha finds a golden deer and asks Rama to get it for her. But actually the deer is not a deer but it is the demon Maareeshan in the disguise of Deer. When Rama tries to catch the deer, Ravana catches Sita and flees to Lanka. But Rama’s loyal friend Jadayu, the Eagle fights Ravana to stop him from taking Sita. But he gets severly hurt during the fight and falls to the land. When Rama and Lakshmana start searching for Sita, Jadayu tells Rama about Sita’s misery and dies in the hands of Rama.
Rama treats Jadayu as his son and performs his last rites. So, the deity of Thiruputkuzhi can be seen in the form of giving the final rites to Jadayu. Jadayu belonged to the Pul family of Eagles. And he was buried here in this place in a pit meaning kuzhi in the local language. That’s why this place is called Thiruppukkuzhi.
In this temple the main deity is called the Vijaya Raghava perumal. One can see the perumal holding Jadayu in his hands. Both the Naachiyaars are standing in opposite manner on both side of the Perumal.

Importance of the temple

The goddess of the temple is known as Maragathavalli Thayaar. She has her own temple in the compound. The locals strongly believe that the Goddess of this temple has the power to grant wishes of the devotees. Couple who are childless come to this temple and offer dal (lentils) to the goddess in the Madapalli. Madapalli is the place where the prasadam of the deity is cooked every day. The dal is fried and then soaked in the water and then given back to the people who offered it and the women is asked to tie the dal in her saree and tie it around the stomach at night while sleeping. The next morning when the couple opens the pouch, they should see the sprouts which are an indication that they will have a child in the near future. It is said that Sri Ramanujar's Guru, Yadhava Pirakasar and Udayavar started teaching vedanthams to their followers here in this temple.

On every (amavasya) no moon night, special poojas are offered to the deity. The pushkarani of this temple is called the Jadayu Pushkarani. It is said that this pushkaram is made by Rama with his bow and arrow. He made this spring for Jadayu when he was dying. In the tamil month of Theppa, a Theppa utsavam (boat festival) is organized for the deities of the temple grandly.

One wonder of this temple is a stone horse that has its legs moving. The sculptor who made this master face didn’t want to make another piece for anyone else and killed himself. To honor the sculptor, on the eight day of the festival the deity visit the place where the sculptor lived.