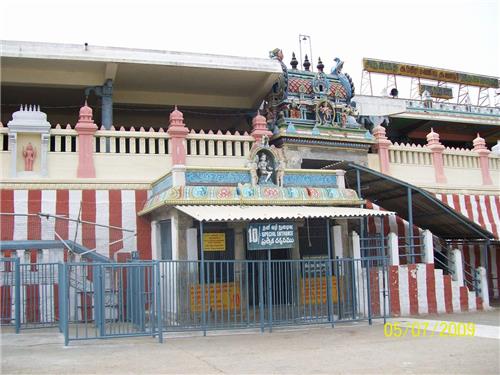 Tiruthani Murugan temple on the hill of Thiruttani is a Hindu temple dedicated to Lord Murugan. This temple is called the Arupadaiveedu, one of the six holy abodes of Lord Muruga. The hill has 365 steps that indicate 365 days of the year. The temple is around 1 hour drive from kancheepuram.

Like many ancient Hindu temples no one knows how this temple originated. There is a mention about this temple in the “Tirumurugaatruppadai” a mythological work of Sangam period done by Nakkeerar. The temple has been patronized by the local zamindars, chieftains and the rulers of Vijayanagara dynasty. The vimanam of the temple is covered with gold.

The saying goes that Indra the King of Gods, gave the hand of his daughter Deivayanai to Skanda in marriage. He also gifted his elephant Airavatam to the couple in marriage. But as soon as the elephant was gone, his wealth started to vanish. Lord Subrammanya, offered to give the elephant back. But, Indra refused to take back the gift that was once made. So, he asked instead, the elephant should be standing facing him. That’s the reason why you will find the elephant in this temple facing east.
Other theories go that Indra also gave a sandle stone as part of the dowry to Subramanya. The sandle paste made by the stone is still applied to the Lord in the temple. The sandal paste applied is believed to attain medicinal value. It is also said that demon Tarakasuran while fighting the Skanda threw a disc at his heart, that’s the reason why, the idol of Subramanya in this temple has a hole in the chest. And the disc was gifted to Lord Vishnu by Skanda.

It is also said that Lord Rama after his victory over Ravana worshipped Lord Shiva in Rameswaram and then came to Tiruttani to worship Lord Subramanya to get some peace of mind. Arjuna in Dwapara Yuga took the blessings of Lord Subramanya on his way to the south as part of Teerth Yatra. When demon Tarakasura, brother of Soorapadma forcibly seized the shanku and chakra of Vishnu, he worshipped Lord Subramanys here and got his possessions back. Vasuki , the king of snakes, healed his bodily wounds caused because of churning process by the devas and asuras in the Milky Ocean to secure the Amrita. The snake king Vasuki was used as the rope tied to the Mantotra Mountain. That is the power of Lord Subramanys at Tiruttani.

According to Saint Arunagirinathar, the hill of Thiruttani is the chosen place for worship by the Gods and preferred abode of saints to do penance and tapas. This hill is known to be the very soul of the world and is considered as holy as sivloka. Around 200 years ago, Sri Muttuswami Deekshitar, was blessed by Loed Murugan on the steps of the hill. The Lord gave him sweet, his prasadam and he got inspiration to write kritis in carnatic music. His first kriti "Shri Nathadhi Guruguho Jayathi Jayathi" is written on Lord Murugan.

On the eve of New Year’s Day, devotees climb the hill singing Tiruppugazh songs and burning camphor on all the 365 steps of the hill. Aadi Krittikai is the float festival that is celebrated in the months of July and August. During this festival, one fifty thousand flower kavadis of flowers are offered to the Lord, the number increases every year. Devotees from far and near come to participate in this festival. In the month of Maasi, Bramhotsavam is celebrated and Valli Kalyanam is performed on the 8th day of the celebrations.